One of the brightest stars of Uzbek football, Sardor Rashidov, returned home to join Lokomotiv. The 2012 AFC Champions League semi-finalist spoke to the-AFC.com, discussing his spells in Qatar and UAE, and his ambitions for the season.

On February 4th, 2018, Sardor Rashidov ended a two-and-a-half year stay in the gulf to return to his native Uzbekistan, joining Tashkent based Lokomotiv.

“I achieved a lot at El Jaish; it is a club where I improved as a player and learnt how to score from different positions on the pitch, I scored over 30 goals and helped the club win titles” reflected Rashidov on his time in Qatar.

“Qatar is an incredible country; staff are friendly and extremely tactful to the demands of the team. When I came to Qatar, I was young, but in El Jaish, I grew up as a human and as a player.”

Rashidov revealed he is still in constant contact with his former boss at El Jaish, Sabri Lamouchi, who has moved to France where he is in charge at Ligue 1 side Rennes.

“Sabri invited me to join him at the club and shared his future plans. Who knows, maybe I will move to France in the summer.”

The 27-year-old’s memories at Al Jazira are less rosy, as he left the club after just six months, having been unable to break into Henk ten Cate’s starting XI.

Rashidov joined the Abu Dhabi side in June 2017 after his El Jaish contract ended, boosting the ranks of a team that had just won the 2016/17 UAE Pro League, but things didn’t go to plan for the winger who found himself on the periphery at the Mohammed bin Zayed Stadium. 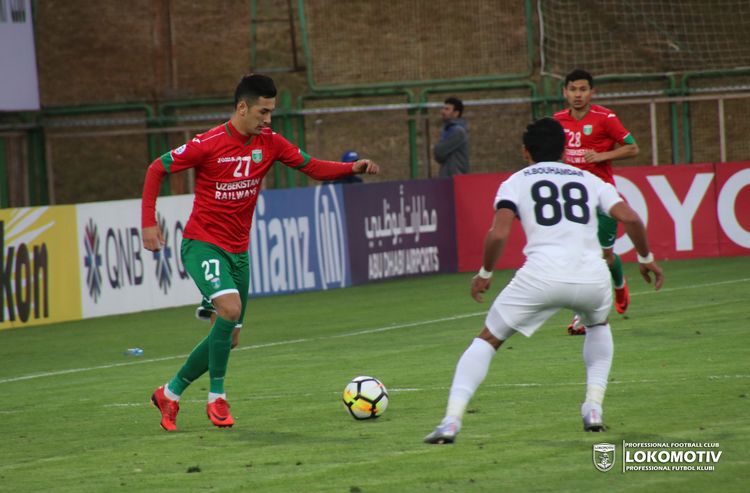 “I did not have too many good memories on the pitch at Al Jazira, but I can say that I made some good friends at the club,” said Rashidov about his time in the UAE.

“I wanted to play, to learn and develop as a player, that is why I decided to leave Al Jazira.”

Ahead of the 2018 AFC Champions League, Rashidov received an offer from Uzbek champions Lokomotiv, and he was quick to jump on the chance to join them.

“I wanted to get to experience a new club, and Lokomotiv are a huge club. They are now a familiar name across Asia and have global ambitions. I came here to win everything.”

Having won three Uzbek League titles and as many cup titles in his six seasons at Bunyodkor, Rashidov dismissed the notion that a return to his home country was a step backward in his career.

“Every club has a golden period; we had one at Bunyodkor, and I think now is Lokomotiv’s time,” explained the Uzbek international.

“Lokomotiv are a very strong team who are competing in the AFC Champions League. I want to be successful and lead this team to glory. Otherwise, I would not have come back to Uzbekistan.”

Rashidov’s homecoming got off to a promising start as he came off the bench to net Lokomotiv’s fifth goal in their 2018 AFC Champions League 5-0 win over UAE’s Al Wahda.

The Tashkent side lost their second game at Zobahan but remain second in the group table with their hopes of reaching the round of 16 for the second time in their history still in place. Rashidov leads his teammates to his old stomping ground next for the Matchday Three clash with Al Duhail.

Lokomotiv began to prepare for the match against Al Duhail